The "meeting of the three tribes"

The “meeting of the three tribes” has characterized the area around the Lyngenfjord and indicates the interaction between the Kven, Sami and Norwegian people in our historical and cultural basis. This has had a strong influence on the place names, language, traditions and the way of life.

Skjervøy Church is an old wooden church dating from 1728 that was commissioned by Sami missionary Thomas von Westen. The church is the oldest preserved wooden church in the Nord-Hålogaland diocese and, like many other north Norwegian churches, it’s a combination of long church and cruciform church. Construction began in 1727 and the church was consecrated the following year. The congregation consisted of people of Sami and Kven origin from Kvænangen, Nordreisa, Lyngen and Kåfjord.

Attending church was compulsory in former times, and anyone absent was fined. People who travelled a long way to attend spent the night in small church cabins on the shoreline near the church. Consequently, the church site became an important gathering place for people from the villages, including before and after the church services.

At Seppalatunet, you can gain an insight into the history of Skjervøy and be tempted by art, handicrafts and local food. Seppalatunet primarily conveys the story of Leonhard Seppala (1877-1967). Seppala grew up on a farm near Skjervøy and later become known as the world’s best “musher” (sled dog racer).

Christen Michelsen Heggelund from Jutland in Denmark became the first merchant in Skjervøy when he settled here in 1662. He quickly gained a monopoly on all trade in the district and became known as the “Skjervøy King”. By the time he died in 1694, he had become a rich and powerful man, and the myths about him lasted for centuries.

The hike out to the coastal fort at Engnes is a beautiful natural gem.

History buffs can walk out to visit the ruins of the coastal fort established by the Germans during World War II. It’s possible to see tunnels, gun sites and trenches. Engnes was a strategic place where they could keep an eye on the northbound and southbound ship traffic. Both the road and the coastal fort were built by Russian Prisoners of War. When the Germans withdrew from North Troms, the coastal fort was blown to pieces, so only ruins remain. The North Troms Museum has erected images at Engnes that show what they believe the fort looked like. (Source: Skjervøy kommune)

The “Fotefar mot nord” (Footsteps to the north) path at Skattøra is situated at the entrance to the municipal centre. People lived in the area from the Stone Age until it was burned during the German retreat during World War II have. The remains of a crofter’s farm are situated down by the sea. The place was inhabited from the mid-19th century until it was burned by the Germans during World War II.

The expression “the Kautokeino rebellion” is used to describe the religious and political revolt that occurred in 1852.

Dagmar Eriksen is a woman who has added colour to Skjervøy municipality with her creativity and determination. She married and had four children. Many years later, when the children had become adults and she had separated from her husband, Dagmar Eriksen moved away from Skjervøy. However, she had always longed to return and eventually came back and lived in the nursing home in Skjervøy.

She had a lifelong interest in needlework and sewed modern clothes for her children. She also started painting, including nature pictures, and sold rugs, paintings and collages. Dagmar also wrote poems, and her poems were read out on the local Skjervøy radio station. The noted Norwegian folk singer Trygve Hoff wrote melodies for some of her poems.

Dagmar designed the Skjervøy regional costume for both men and women. The beautiful female costume features embroidered flowers on the shirt, skirt and apron.

“We are many here in Skjervøy municipality who appreciate her work and remember her as a strong woman with many talents.” (Source: Skjervøy kommune) 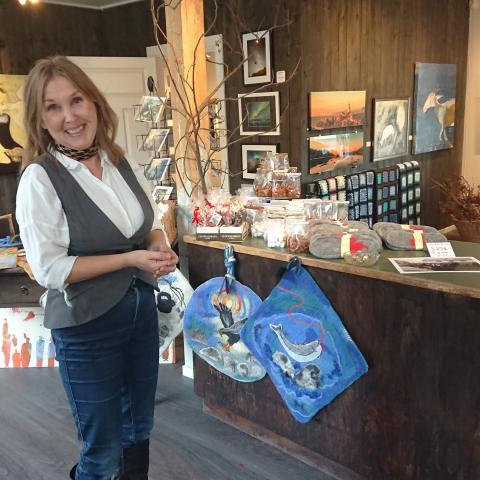 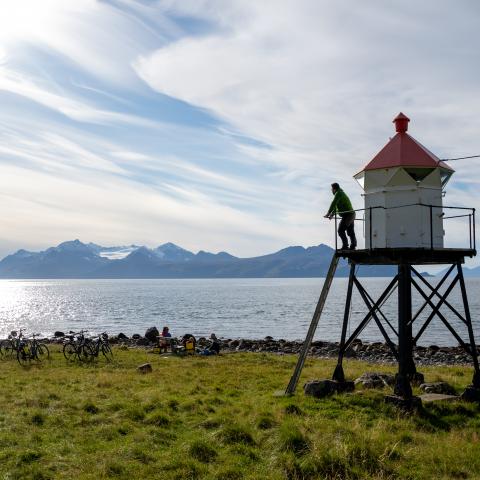 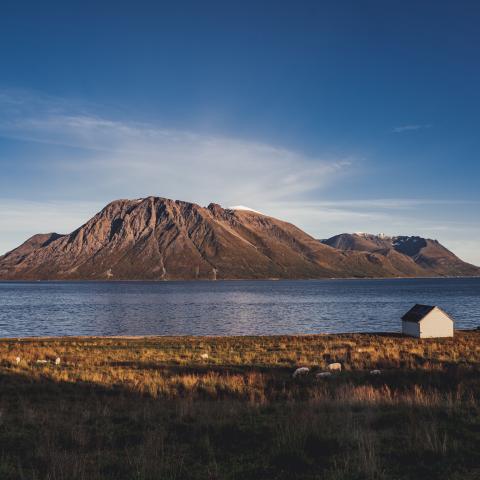 Årvikmarka is a nice, well developed hiking area in the Årvikdalen valley on the island of Arnøya. This walk is well suited for history buffs.

You can see the ruins of the former power plant that was blown up by the Germans during World War II.

The culture trail at Lauksletta is an easy and accessible walk suitable for the whole family. During the walk, you can learn about the area’s nature and culture. The trail starts at Tarenestet at the far north of the Lauksundet strait.

In August 1943, a group of innocent people were arrested by the Germans on the island of Arnøya after the partisans Ingolf Aspås and Volodyna Omsk, as well as Jørghild Jørgensen, were killed in the Rotvåg Cave northeast of Årviksand. All those arrested were sentenced to death, but seven of the accused were pardoned. The remainder – seven from Arnøya and one from Tromsdalen – were brutally executed in Kroken in Tromsø on 23 October 1943. The incident has since been referred to as the Arnøy tragedy.

A plaque has been erected at the Rotvåg Cave in memory of the partisans who hid here while they spied on the German shipping – in constant fear of being discovered.

We recommend hiking from Årviksand to the Rotvåg Cave. Please note that this is a long and demanding hike.

Edmund’s fisher-farmer museum in Årviksand is a privately owned museum with a large collection of boats, tools and household equipment portraying the life and work of the fisher- farmer. You will also find equipment from merchants and travelling teachers, as well as impressions of everyday life for children and adults alike.

You will find more information on the museum’s Facebook page here.

The cultural trail on the island of Laukøya starts at the end of the road at Nikkeby. The trail follows the coastline and several information boards along the route enable you to learn about Laukøya’s nature and culture.

The historic farm Maursund Gård, which is one of Nord-Troms Museum’s exhibition sites, is situated at Maursund on the island of Kågen. You can experience an authentic trading centre here with roots back to the 17th century. The farm has an extremely idyllic location down by the fjord.

The trading post had its heyday from the late 18th century until the end of the 19th century. Maursund was extremely well located on the maritime route, which made the area and the farm attractive for the Trondheim merchants who starting the trading post. The economy was based on a combination of farming, fishing, large-scale trade and transport by traditional boat.

In the late 1920s, the district doctor Herstad took the initiative to establish a limited company to provide electric power to Skjervøy. The valley where the power plant was built was named Doktordalen in honour of Herstad. Construction began in 1929 and the first electricity was supplied the following year.

If you want to walk to Doktordalen, you will find a description of the route here. 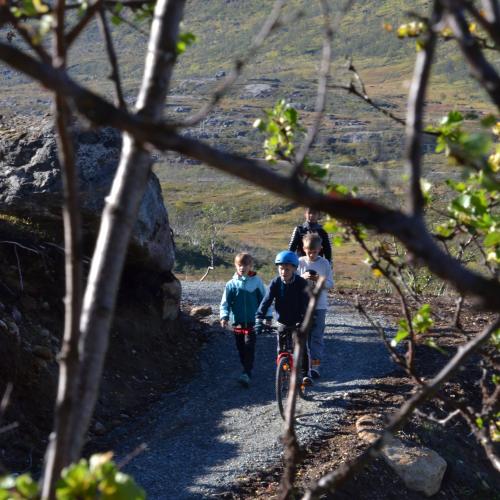 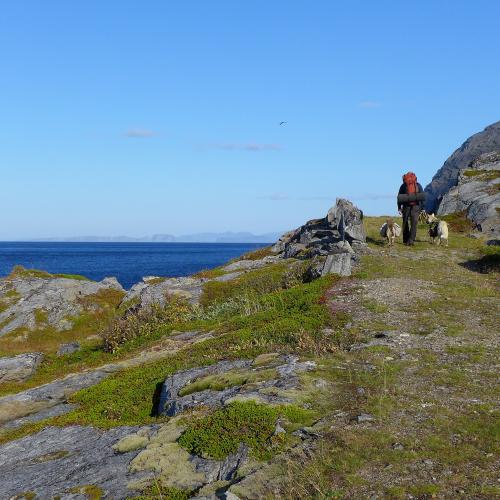