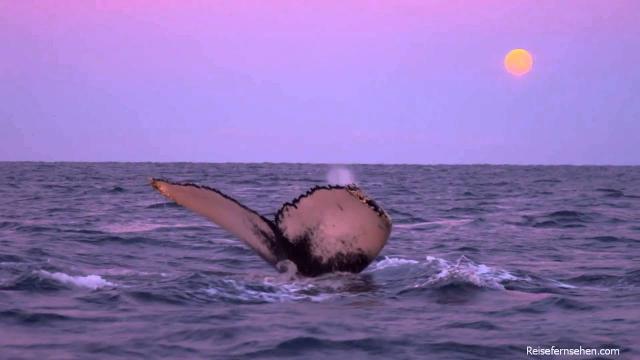 Whale watching safari off the coast of Skjervøy is the highlight of any Norwegian holiday!

On your Norwegian bucket list, along with Northern Lights and Norwegian fjords, should be whale and wildlife safaris. Can you imagine how it feels to watch these majestic animals chasing herring only a short distance from your boat? Feel the arctic air and sprinkles of the North Sea waves on your face, listen to the immense silence – and then suddenly, a friendly black and white figure surfaces and waves its beautiful tail for you.

The beautiful Skjervøy archipelago in the Lyngenfjord region has become an extremely popular destination for whale watching safaris. People from all around the world are travelling here to get a close-up look at the beautiful whales. 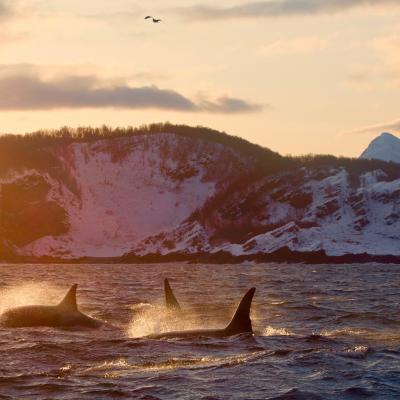 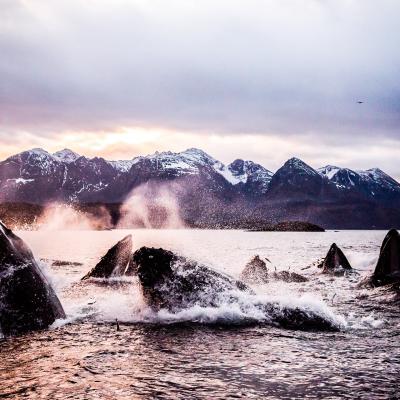 Whales migrate from fjord to fjord following the herring

In the winter of 2017, the herring migrated from the coast off Tromsø northwards towards the Lyngenfjord. The whales were not far behind them in search of a feast and, in recent times, there has been phenomenal activity in the sea off Skjervøy.

Amazing experience on a wildlife safari

Joanna from Italy is one of the many who have been on a whale watching safari off the coast of Skjervøy.

“It was completely amazing! I have never experienced anything like it before. It was unbelievable to see the whales swimming so close to us and to see how they moved in the sea. As soon as we returned to land, I just wanted to go out again,” she says just after returning from the whale watching safari.

The whales you can see in Northern Norway

Two whale species in particular have been observed off the coast of Skjervøy: humpback whales and orcas (killer whales). Learn more about whale behaviour here.

Orcas have strong family bonds and their groups often remain together for several generations. The orca has a black body with a large white patch above and behind the eye. The orca is the largest member of the oceanic dolphin family. The orca’s diet consists of fish (such as herring), seals, sharks and dolphins.

Humpback whales can live alone or in small groups. The humpback whale is stocky and strong, has black dorsal colouring and (as the name suggests) an obvious hump on its back. It catches herring by opening and filling its mouth. It can catch an entire school with a single mouthful!The humpback whale is very acrobatic and is known for its spectacular jumps above the surface! The humpback whale also produces a unique and complex song.

Whale watching safaries, do not disturb the whales - policy

To avoid disturbing the whales while they are feeding, it’s important to maintain some distance. However, this won’t prevent you from seeing the whales. Jumping humpback whales and orcas that want to play are often more curious and swim closer to the boats. 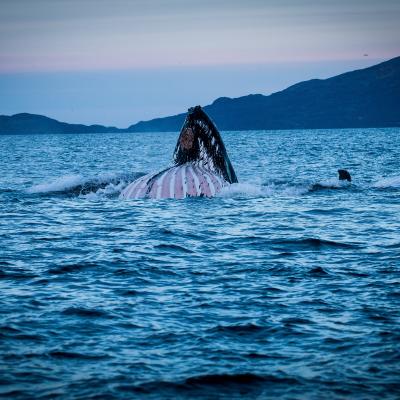 Go before it is too late

We recommend you don’t wait too long before making your dream of whale watching safari come true. The whale experts who have followed the whales for many years believe the whale adventure will soon be over. With the changing sea currents, the herring will migrate out to the open sea and, when this happens, the whales will follow them. Naturally, this will make it harder for us to experience them.

By car: If you are driving from Tromsø, turn off the E6 highway and Langslett continue to Skjervøy. The drive from Tromsø to Skjervøy is 160 km and takes about four hours. You will be rewarded with a lot of beautiful scenery along the way.You can shorten the drive by taking two scenic ferry crossings – over the Ullsfjord and the Lyngenfjord. View the ferry timetable

NB! There is roadwork in the Maursund tunnel and you can only pass at certain times. Latest passing time for whale safari is 09:20, please check here for updated info.

By bus: There are daily bus services from the Passenger Terminal at Prostneset in downtown Tromsø to Skjervøy, which involves swapping buses at Langslett/Sørelva.

By express boat: You can catch the express boat from the Passenger Terminal at Prostneset in downtown Tromsø to Skjervøy. The journey takes just over two hours.

Click here for information about buses and express boats

By plane: You can also fly from Tromsø to Sørkjosen Airport and then drive from here to Skjervøy.

You have the possibility to join a whale safari from several places in our region, Skjervøy, Nord-Lenangen (Lyngen) and Sørkjosen.

From Skjervøy you can join:

From Sørkjosen you can join:

From Nord-Lenangen, Lyngen, you can join:

Whales follow the herring, which is their main feed. The herring typically moves to our coast around mid to end October, which is when our whale season begins. Whale watching tours are organised until the end of January, when the herring start moving further out to the sea. Best time to see the whales in Skervøy is from end of October to end of January.

In the last years, there have been so many whales on the shores near Skjervøy, that we are tempted to say that yes! you are guaranteed to see the whales in Lyngenfjord region. However, whales and herring are wild animals, and many factors such as weather, which we can't control, also impact on the success of your tour. Even if you would not see the whales, our region's breathtaking beauty is worth of seeing from the seas, so we highly recommend taking a wildlife safari.

Lyngenfjord region and Skjervøy are just a short drive outside from Tromsø. Many whale safaris from Tromsø also take place in the Skjervøy archipelago. Sometimes a whale or two is seen from the shores of our fjords, but if you really want to maximize your chances, book one of the whale safaries from Skjervøy or Sørkjosen.

No. As the whale safari is happening in the winter time and partially during the polarnight, you will receive a thermal suit, which will keep you warm, before heading out on the boat. Remember to dress warm underneath, we recommend wool and good shoes. There are different boats for the whale safari - the RIB boats f.ex. are open boats where you are out in the elements. If you freeze easily pick a tour with a boat with the possibility to go inside and get warm.

All our members who offer whale safari provide you with a thermal suit. We recommend that you dress warm, so you do not get cold and can enjoy the experience. Warm baselayer, wool is good, warm shoes, gloves/mittens and a warm cap is something you should bring with you. And don't forget your camera to capture moments from this unforgetable day - a telephoto lens will make it easier to get closer. Read more about photographing whales here.

Yes, a whale safari is also a nice family experience. A boat with a cabin is a good option, if your kids are below 120 cm/12 years. Older children manage to hold on in a RIB boat.

There are mainly two types of boat. One is a more closed boat where you can be inside and outside. Most operators use a RIB (rigid-inflatable boat), so you get closer to the whales. A RIB, is an open boat and you are always outside. If you have dressed warmly and have warm shoes, this is not a problem. You will also get a thermal suit before heading out for the whale safari.

No, even as the whale safari partially takes place during the polar night season in Skjervøy, it does not mean it is completly dark here. Even on the shortes days before Christmas we have a few hours of daylight where it is possible to see orcas, killer whales, humpback whales, porpoise and other wildlife on a whale safari.

All our whale safari operators follow the latest hygiene and safety routines every step of the way and have also received an approval from the municipality to run whale safaris. Follow the detailed instructions you receive before the start of the whale safari to minimize the risks of infection.

Two whale species in particular have been observed off the coast of Skjervøy: humpback whales and orcas (killer whales). Learn more about whale behaviour here.

Orcas have strong family bonds and their groups often remain together for several generations. The orca has a black body with a large white patch above and behind the eye. The orca is the largest member of the oceanic dolphin family. The orca’s diet consists of fish (such as herring), seals, sharks and dolphins.

Humpback whales can live alone or in small groups. The humpback whale is stocky and strong, has black dorsal colouring and (as the name suggests) an obvious hump on its back. It catches herring by opening and filling its mouth. It can catch an entire school with a single mouthful!The humpback whale is very acrobatic and is known for its spectacular jumps above the surface! The humpback whale also produces a unique and complex song.

Even if there are companies who offer swimming/snorkling with the whales, this is not something we recommend. We encourage our partners to follow the guidelines made by the industry itself, which you can read here.

The Lyngenfjord region can offer many different winter activities such as dog sledding in the Reisa valley, snowmobile safari in Rotsunddalen, visit a sami camp, try a snow shoe hike or experience the northern lights in the evening.

Skjervøy and Storslett can also offer other activities such as:

After having been out on a whale safari, you are probably hungry. There are several cafés and restaurants to choose from in the nearby area. In Skjervøy you can f.ex. have dinner at Maritim Hotel Skjervøy, På Hjørnet Kafe or Kasjotten. In Sørkjosen you'll find f.ex. På Taket Kafe and in Storslett Bios Cafe. We can also recommend Solvind Restaurant at Spåkenes.