Following in the tracks of Jan Baalsrud

Reality is sometimes even more dramatic than authors and film-makers can imagine. The story of Jan Baalsrud's escape through occupied Northern Norway in the spring of 1943 has something of the improbable about it. The new film about the drama, The 12th Man, is generating considerable interest in the story, so we sought out the locations where it all happened.

At the end of March 1943, Jan Baalsrud and 11 other intelligence officers from Kompani Linge and crew were sailing to Troms on the MS Bratholm to organise teams of saboteurs in occupied Norway. The boat was discovered; three of them were shot and eight arrested and later executed in Tromsø. Only Jan Baalsrud, the 12th man, managed to get away, escaping across Nord-Troms from 30 March to 1 June. With the help of many locals, he managed to reach Sweden, but not entirely intact, as he was forced to amputate most of his toes because of frostbite he developed while in a snow cave.

In the footsteps of Jan Baalsrud

The story is recounted in David Howarth's book We Die Alone, first published in 1955. In 1957, the book was made into a film, which was nominated for an Oscar and voted Norway's best film of all time. In 2017, The 12th Man, a completely new version of the story, will be released. However, film buffs and military history enthusiasts will be interested in seeing the places where the real drama unfolded. Together with www.nordnorge.com we travelled around the Lyngenfjord to see where it all happened.

Toftefjorden, on the island of Rebbenesøya, where the dramatic escape began, is uninhabited today. However, there is a memorial to the Brattholm tragedy in the form of 11 pebbles from the area, one for each of those who died. In the now abandoned Haugland farm on the island of Hersøya, Jan Baalsrud was given shelter and food for the first time. The main house is still there.

The world’s northernmost distillery – Aurora Spirit – is around 11 km north of Lyngseidet. Aurora Spirit has been established on an old coastal fort, which was used during both World War II and the Cold War. An exhibition on Jan Baalsrud and the history of the coastal fort is housed in one of the fort’s bunkers.

After getting lost in a snowstorm in the Lyngen Alps, Jan Baalsrud sought shelter in a hay barn above the village of Furuflaten. The barn is still there today. In the community centre is a simple exhibition about Jan Baalsrud, which includes treasures such as his skis. They were found in the mountains in the following summer after being used as a milk sledge, and given to the collection. The rudder of the MS Bratholm is also on display.

On the other side of the fjord, which Jan Baalsrud reached on 12 April after being taken across the water, is a small basic cabin with no heating, ironically named the Hotel Savoy. Today, there is no evidence to indicate what happened here, but many people have written in the notebook which is used as a visitors' book. Although the restored cabin looks quite idyllic when the weather is good, one can only imagine how freezing it must have been on ice-cold April nights.

Jan Baalsrud's longest stay anywhere during his escape was in a mountain fissure at the top of the Manndalen valley. A 5.5-kilometre trail leads to this fissure, the same trail that the people of Manndalen used when they sneaked up to Jan Baalsrud to bring him food. The trail is easy to follow, almost free from rocky sections and with only short stretches of bog. An elegant pedestrian bridge has been constructed across the river, almost at the end of the trial. "The hole" is a slight exaggeration; Baalsrudhula is actually just a crack in the rock. It is almost impossible to imagine how a man with frostbite could have survived here for three weeks. Walkers with a normal level of fitness will take about 3.5–4 hours to walk the trail, including a lunch stop. See also the Hiking guide to the Lyngenfjord, number 15.

Baalsrud's final wish before he died in 1988 was to be buried in the churchyard in Manndalen. His headstone is modestly situated next to the fence by the entrance to the churchyard, and is no different from any of the other headstones, except for the inscription: "Thank you to everyone who helped me to freedom in 1943".

The Brattholm monument in Tromsø

At the place where eight of the 11 onboard the MS Brattholm were executed stands a memorial today. The memorial is now in the grounds of the University of Tromsø and is engraved with the names of all of those who died.

Every year at the end of July, the Jan Baalsrud March takes place. It is 200 kilometres long and crosses the islands of Rebbenesøya and Ringvassøya, the Lyngen peninsula and the mainland east of Lyngenfjorden. The march takes eight days and you can do either all of the march or just part of it.

Of course, we recommend the book Ni liv (We Die Alone — David Howarth) for exciting reading, as well as the film The 12th Man, which will première in December 2017. If you should come across the old film Ni liv from 1957, it is definitely worth a watch! 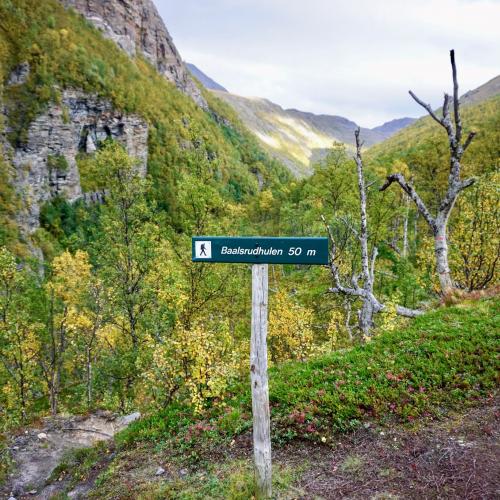 Questions and answers about Jan Baalsrud

The grave is in the churchyard in Manndalen is situated in the heart of the village. It is located opposite from the entrance, towards the fence.

The exhibition at Furuflaten is located in Furustua, signed from the main road. There are no specific opening hours, but Kjellaug Grønvoll (tel. +47 957 34 949) will gladly help you when she is available. The hay barn is private and not normally open to the public.

Hotel Savoy is situated off the E6 just north of the boundary between the municipalities of Storfjord and Kåfjord, 14 km north of Skibotn. It is not currently marked, but the GPS coordinates are as follows:69.467396, 20.325756  There is a reasonable parking area next to the fjord, and you then follow a short path down to the cabin.

The trip to Baalsrudhula starts from the summer dwelling in the Manndalen valley, which is where the road ends at the top of the valley. From here, the path is well-marked with signs and orange tape. Read more about the hike in our hiking guide.

A visit at the Baalsrud exhibition and Nato bunkers at Aurora Spirit is on request only and for minimum 6 persons. It is located 11 km north of Lyngseidet. Contact Lyngen Adventure for more information on tours www.lyngen.com

The 12th Man – the film about Jan Baalsrud 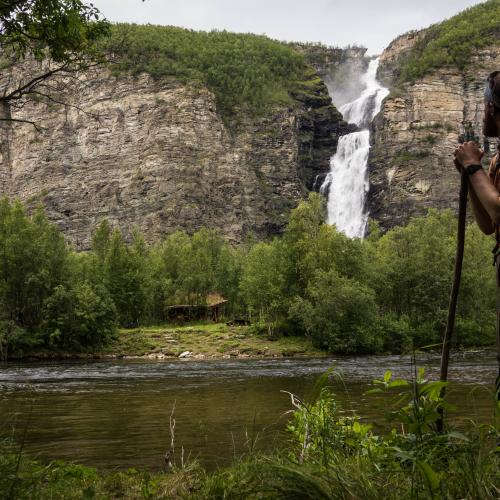 Historic Hikes in the Lyngenfjord region

In the footsteps of Jan Baalsrud